In this post I will share the difference as well as some more about my own retreat Master Plant Dieta with Noya Rao.

The Ayahuasca Diet is based on a list of necessary precautions and strict food recommendations, based on scientific evidence that they are essential for safety*. It was developed as a reaction to the quickly growing Ayahuasca Tourism to keep people safe. It‘s role is to minimise the likelihood that someone will endure physical harm while participating in Ayahuasca Ceremonies.

The Master Plant Dieta is a foundational element and integrale component in the healing traditions and Plant Medicine Ceremonies of the Amazon. Fasting on Master Plants in conjunction with Ayahuasca has been used for thousands of years by curanderos (healers) to open their minds and hearts to guidance and learn from the spirits of the plants how best to heal others. During this fasting rituals, consciousness is being altered in a fundamental way that allows the dietero(a) to connect directly with the Higher Self and the knowledge of the Plant Teachers. The strict ritual of the Master Plant Dieta serves as an expression of determination and dedication to ones spiritual, emotional and physical transformation. The Dieta plays a fundamental role in supporting the dietero(a) to integrate and sustain the healing they receive through Sacred Plants.

While not all Master Plant Dietas follow the same process, rules and rituals, there is a general protocol.
The first day will generally involve an initial period of meditation and intention setting. If possible you visit the Master Plant that you will be ingesting, soplay (breath smoke upon) it with mapacho (wild tobacco), pray and recite your intentions for your coming dieta. Then you prepare yourself to drink the Master Plant extract. You first soplay yourself with Mapacho (jungle tobacco) and Agua de Florida (a mixture of cleansing herbs and flowers in alcohol) or Palo Santo (the smoke of Sacred Wood) to cleanse yourself in preparation for your communication with the Master Plant Spirit. You then hold the cup with the Sacred Plant extract to your mouth, restate your goal and what you will be abstaining from and the length of your dieta. You soplay into the cup with mapacho three times and drink the extract through the smoke. You are encouraged to meditate in quiet places, pay close attention to your dreams, journal and soplay yourself before going to bed and when you wake to keep your energy field clean. If you have oppressive emotions you soplay yourself again. The next day you will drink the plant extract early in the morning, fast from food all day and drink again before sleep. The third day again; only eat a simple meal at night – unless you participate in an Ayahuasca ceremony at night, then you don’t eat.
The rest of your dieta you will drink the Master Plant extract in the morning and before sleep and diet on frugal and bland solid foods containing no oil, salt, sugar or spices nor any other foods that you committed to sustain from for the duration of your diet. Mostly it is only a little rice, quinoa, plantains or yucca twice a day and sometimes they offer a lentil soup, cucumber (yeah!!) or a little river fish (that is full of tiny little bones and you should eat it without any bones being broken).

My Dietas
During my dietas I filled my days mostly in solitude with meditation, prayer, contemplating, singing, playing guitar or flute, journal, walk in the jungle visiting the medicine plants, occasionally lending a hand to prepare the Ayahuasca or other plant brews, bathing in the river or at the cascade (in the Munai Camp of Maestro Don José Campos where I dieted several times on Bobinsana and other plant mixtures with him and/or his cousin Wilmer Muñaz Campos) or swim in the lake Cashibo Cocha (at the Sui Sui Centre where I dieted Noya Rao with Maestra Juanita, an abuelita (little grandmother) of the Mahua Shipibo tribe). 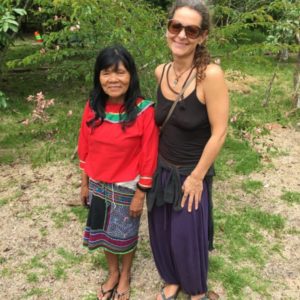 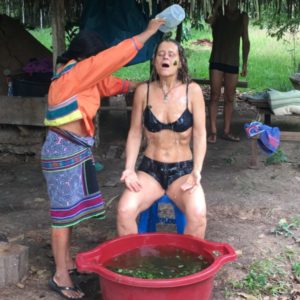 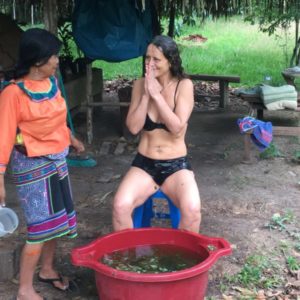 The Master Plant Noya Rao
Noya Rao, known as the Tree of Life and the Path to Truth, is used in the sacred ceremonies by the Mahua Shipibo traditions of Peru. Dieting the bark of the roots is believed to be an essential step on the path of becoming a healer. It can activate your intuitive capacities as well as helping to bring to light unconscious assumptions about the world. It supports you to access the courage to abandon limiting beliefs and change their perception.
For thousands of years the Shipibo curanderos (healers) have been connecting and working medicinally with this special tree, even though this very rare and mythical tree has been disappeared from this planet for long! They cultivated an enduring spiritual relationship with Noya Rao, explaining that they were receiving etheric chipsfrom the spirit realm, which were implanted during ceremony. Some shamans are said to have a wife in the spirit realm and a child in the tribe of the Chaikuni people who also inhabit the spirit realm. The child would gather these etheric chips and send them down to the physical realm to use as needed. These seeds are believed to inhabit the dietero(a) and continue to grow inside them for the rest of their life. The implementation of these chips is the method the Shipibo people use to initiate recipients into the healing profession.
Only about eight years ago the Noya Rao tree has “returned to the human dimension’ and people diet on the juice of the bark . Up to now there are only three of these mystical trees to be found, a Grandmother, a Mother and a Son.
I have been dieting on the roots of the Son. Unfortunately I couldn’t visit the tree during my dieta, because all three of them grow on the same Mahua Shipibo property in Iquitos and I was dieting in Pucallpa. But after this I will go for an apprenticeship with Shipibo-Konibo Maestro Heberto Hirán Garcia Mendendez in Ashi Meraya, Iquitos. So I am definitely planning on visiting the tree to pay my gratitude and bring my prayers. They say that if you visit the tree at night it glows in the dark – but only people with faith can see this so it can’t be captured on photo.

So, while many people are sceptical I had the privilege to actually diet on the rare Noya Rao and ally myself with this tree that – when created and maintained well – will give me lifelong support, providing information, guidance and energy. Like building any other friendship, the quality of the relationship that you build with a Plant is determined by the energy you give to the connection. Sincere, authentic attention given to the Plant throughout and after your fast will enable you to unlock guidance, information and energy stored within the Plant and find important answers that will aid you in your healing journey.
Sticking strictly to your diet is a powerful expression of dedication and commitment. It shows that you are determined to heal and ready to receive guidance, strength and protection.

Breaking the fast
When the duration of the fast is over, the dieta is officially closed. Like with the opening of the Dieta this is done with an Ayahuasca ceremony with certain rituals declaring that it is completed and expressing your tremendous gratitude to the Plant spirit. You officially break the Master Plant Diet by ingesting food that was prohibited during the Dieta, like spicy food such as a raw chili pepper or taking a mixture of lemon/onion/salt or oil/salt/chili/garlic/sugar, before consuming any of your post-dieta food. You are invited to pray to the food, to thank the Plant Spirit and state to your Plant Spirit Ally that you are ingesting this drink or food as a symbol that the contract is about to be broken.

After officially closing your Dieta, your Post-Dieta*** starts: another diet to respect your friendship with the Plant and make it settle in your body. The basic idea is that during the dieta a strong relationship is formed and a great deal of attention and energy is shared, so even though the diet has been fulfilled you should continue to give energy, thoughts and feeling to the Plant Spirit. You shouldn’t want to run out and do all the things that were sacrificed or the dieta. That would be like ending a relationship and wanting to stay friends, but diving into bed the next day or soon after with someone else. That would be disrespectful and your friendship would most likely suffer as a result. So it is important to maintain the same reverence for the Plant while slowly starting to ingest salt, oil, sugar etc.

* Ayahuasca Diet
On a physical level Ayahuasca inhibits the action of the enzyme monoamine oxidase (MAO) in the body. While MAO is inhibited, compounds that the enzyme would would normally break down could accumulate in the body to toxic levels. So it is advised to avoid taking Ayahuasca alongside foods that contain tyramine (an amino acid) which stimulates the release of norepinephrine in the blood. If norepinephrine gets too high it can cause headaches, constriction of blood vessels, severe hypertension and in rare cases even heart failure or a fatal stroke.

The list of foods to be avoided was first published in 2012 by Dr. David Flockhart for when one is prescribed SSRIs or any MAOI.

– Limited use of toothpaste, deodorant, insect repellent, soap and other personal care products, unless they are 100% natural, free of any scent
– Abstinence from sex in any shape or form
– Restriction of certain foods and drinks, such as: Oil, Salt, Sugar, Spices, certain fruits such as Papaya, Mango, Watermelon, Caffeine, Alcohol Chocolate, Red meat, Pork, Seafood

While the outward expression of the dieta is often talked about in terms of food restrictions and sexual abstinence, the dieta goes much deeper than the physical aspects. The act of abstinence and the food diet is only touching the surface. Thoughts have a very important role in the dieta. Negative thoughts or certain fantasies are a demonstration of the lack of determination. So there are some more important restrictions on another level that you have to prevent yourself from:
– Thinking negatively and complaining about the dieta
– Doubting or losing faith in the process
– Fantasizing about favorite foods or sex

*** Post Dieta
The duration, food diet and other restrictions for this are being set by the Maestro or Maestra that has been guiding you. Mostly it is at least two weeks, still refraining from sugar and many other things. Our Post-Dieta with Noya Rao is… 3 months and includes much more that the food. But the good thing is that most of the time fruits and vegetables can be eaten again in all abundance!

Thanks
This is written with tremendous thanks to Elio Geusa, who generously shares his knowledge about the healing traditions of the Shipibo tribe and Master Plant Dietas during the dietas that he facilitates with the Shipibo Maestros Juanita and Don Miguel.